50 Years of Earth Day: The Environmental Movement at CUIMC and Beyond

As a companion to the exhibit installed in the Health Sciences Library (Lower Level 2, Hammer Health Sciences Building, 701 W. 168th St, New York City), this exhibit is presented in 5 sections below, with links to additional materials.

The Study of the Environment and Public Health, 18th-19th centuries

Throughout human history, people have studied and recorded the impact of the natural environment on human health and well-being. With the emergence of the European industrial revolution during the 18th and 19th centuries, the concept of pollution increasingly received public attention.

These two examples serve as early Western works on the topic of environmental health: 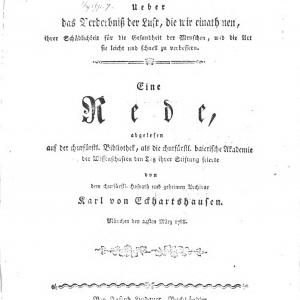 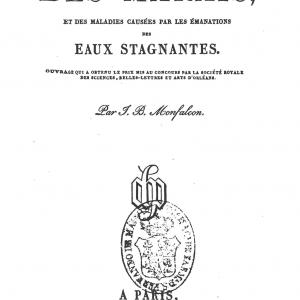 With the arrival of germ theory during the later 19th century, medical schools began offering instruction in bacteriology and hygiene. In 1904, Columbia University’s Committee on Curriculum proposed the establishment of the Department of Hygiene, Sanitary Science, and Preventive Medicine.[1]

At Columbia University, these courses, offered by the Department of Pathology, served as early precursors to the study of environmental health.

The Study of the Environment and Public Health, 20th century

As seen in the 1930 Announcement, the Institute offered MS degrees, but still no MPH degrees, to students of medicine, nursing education (at Teachers College), and PhD candidates in conjunction with the Graduate Faculties. So while courses in bacteriology, hygiene/sanitary science, and epidemiology continued to be part of the medical curriculum, the establishment of the Institute responded to the interdisciplinary nature of the growing public health field. 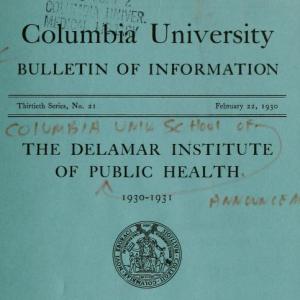 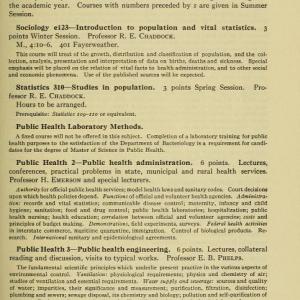 More about the School of Public Health

While humans have been concerned about the impact of environmental factors on food, water, and air for millennia, a series of events set the stage for the onset of the U.S. environmental movement in the 1960s.

Prior to this, the U.S. government generally only responded to environmental problems tied to agriculture. President Franklin D. Roosevelt signed the Soil Conservation Act of 1935 and the Flood Control Act of 1936, paving the way for the federal government to intervene in the conservation of the nation’s land and waterways.

During World War II, chemical innovations further developed applications to control the environment, particularly through DDT (dichlorodiphenyltrichloroethane)–a pesticide initially used to kill mosquitoes to control malaria, but which later gained wide-spread use on U.S. crops. In 1962, marine biologist Rachel Carson published Silent Spring (1962), which raised the alarm about the devastating effects of DDT and other pesticides. The resulting backlash sparked the modern environmental movement.

Other environmental legislation followed with the Clean Air Act (1963/1970) and Wilderness Act (1964). Simultaneously, social and political activism was underway in the form of the civil rights movement and budding anti-war and nuclear disarmament movements. Students and practitioners in medicine and health sciences naturally participated and influenced these movements during this time.

Earth Day was the brainchild of two notable individuals, peace activist John McConnell, designer of the Earth Day flag, and Gaylord Nelson, Senator from Wisconsin (1963-1981) who on September 9, 1969[2] proposed creating a day dedicated to national environmental teach-ins. McConnell also proposed a global day to promote balance and peace on earth at the October 1969 National UNESCO conference in San Francisco. By November 11th, the Earth Day date—April 22nd 1970–was set.

Groups across the nation quickly followed suit in organizing teach-ins within their own communities, as did doctors, nurses, social workers, scientists, and health sciences students.

Some activists and students rejected the government-sanctioned event, as a sanitized attempt to placate the radicals and co-opt the anti-war movement. While there were politicians that gave lip service to environmental concerns that day, a slew of scientists, artists, politicians, activists, and advocates—estimated at 20 million Americans—participated in Earth Day activities.

According to the student newspaper, the Spectator, Columbia University anticipated nearly 50 speakers on campus, ending with a march from the Sundial to 14th Street. Yet, less than 400 students attended campus activities. Some students boycotted the activities due to the choice of speakers, such as those from the automobile industry and government administration. The activist group Ecology Action held a teach-in at Teacher’s College in the days leading up to April 22nd but also boycotted for similar reasons.

More from the collections 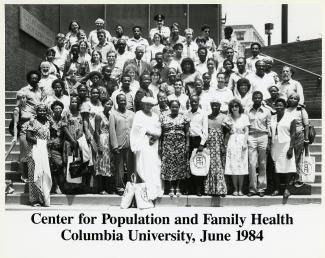 In 1968, American biologist Paul Ehrlich’s provocative book, The Population Bomb (1968), framed overpopulation as the largest threat to the environment with it being a harbinger of overtaxed croplands, pollution, and diminishing resources.

While the study of population trends continued, global family planning services were seen as a moral duty promoted by public health institutions in western nations, the World Health Organization, and the United Nations. In 1975, the Columbia University School of Public Health established the Center for Population and Family Health (CPFH; later the Harriet and Robert Heilbrunn Department of Population and Family Health), furthering the study of family planning and reproductive rights both nationally and internationally.

While the green revolution delayed Ehrlich’s predictions of mass starvation, overpopulation has remained a large concern for the planet’s sustainability and our quality of life.

More from the collections

Celebrated every year since 1970, Earth Day’s impact has ebbed and flowed over the years, but the environmental movement has never disappeared.

Here are some items from our collections related to environmental initiatives over the years, both at CUIMC and beyond.

A life-long climate activist, Vice President Al Gore established the Global Learning and Observation to Benefit the Environment (GLOBE) program on Earth Day 1994. His book and documentary film, An Inconvenient Truth (2006), highlighted the looming global warming trend and its consequences for life on Earth.

Seen with her flowers, Lady Bird Johnson (First Lady to President Lyndon B. Johnson) was an advocate for the planting of wildflowers, beginning with her husband’s signing of the Highway Beatification Act in 1965. This bill included funding for landscaping, influencing today’s roadside foliage.

A naturalist, Lady Bird went on to serve on the National Park Service Advisory Board; National Geographic Society’s Board in 1982; and co-founded the National Wildflower Research Center (now Lady Bird Johnson Wildflower Center) in Austin, Texas.

Lady Bird sent this photograph with a letter to friend Mathilde Krim, in which she described the wildflower program and center to preserve native plants. Lady Bird was awarded the Rachel Carson Award posthumously in 2013.

Columbia University launched its Sustainability Principles (2016) paving the way for the Sustainable Leaders Network (2016-) and first Sustainability Plan in 2017. These initiatives include the promotion of reusable water bottles and other food containers.

Columbia University and CUIMC continue to develop a plan to align with NYC’s OneNYC waste-to-landfill goal by 2030 and match or exceed New York City’s goal of reducing all GHG emissions 80 percent by 2050.

Copyright Notice and Requests for Reproductions

The copyright on all the items in this exhibit are held by the authors, including Columbia University in the City of New York and may not be reproduced without their permission.

Inquiries regarding reproduction of these images should be directed to the Head, Archives and Special Collections, Augustus C. Long Health Sciences Library, Columbia University, 701 West 168th St., New York, NY 10032 or to hslarchives@columbia.edu

Book: 50 Years of Earth Day: The Environmental Movement at CUIMC and Beyond
Back to top