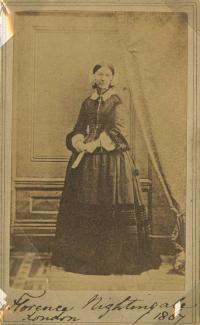 The Auchincloss Florence Nightingale Collection documents the life and work of Florence Nightingale (1820-1910), the founder of modern nursing. It includes over 250 letters of Nightingale dating from 1838 to 1901, as well as about two dozen to her. Equally important are the comprehensive holdings of Nightingale's published works, including first editions of Notes on Hospitals (1859), Introductory Notes on Lying-In Institutions (1871), Life or Death in India (1874), and multiple copies of her landmark Notes on Nursing (1860). The Collection also has a wealth of pictorial material including prints, photographs, and cartes-de-visite of Nightingale and places associated with her, as well as of other figures in the history of nursing.

There is also substantial manuscript and printed material relating to the Nightingale Fund, a national fundraising effort that led to the creation of the first modern school of nursing at St. Thomas's Hospital in London. Included are letters from approximately 300 prominent British citizens in answer to solicitations for support; financial records; and publicity material.

Biographies of Nightingale, early textbooks of nursing, and histories of nursing are also included in the Collection.

A calendar of the letters and a title lists of the books in the collection can be accessed online. Since 2011, most of the books can also be located in CLIO, the Columbia University Libraries' online catalog. All material must be used in the department's Geraldine McAlpin Webster Reading Room.

Since January 2016, digital versions of the Nightingale letters in the Auchincloss Collection can be accessed through the Florence Nightingale Digitization Project, an international effort spearheaded by Boston University's Howard Gotlieb Archival Research Center to provide access to Nightingale's voluminous correspondence.

Hugh Auchincloss (1878-1947), Professor of Clinical Surgery at the Columbia University College of Physicians & Surgeons and an Attending Surgeon at Presbyterian Hospital, donated the core of the collection in 1932 in memory of his mother, Maria Sloan Auchincloss, on the graduation of his daughter, Maria Sloan Auchincloss, from the Presbyterian Hospital School of Nursing. The collection was added to over the years through many donations by Dr. Auchincloss and, after his death, by Auchincloss family members and by friends of the School of Nursing.