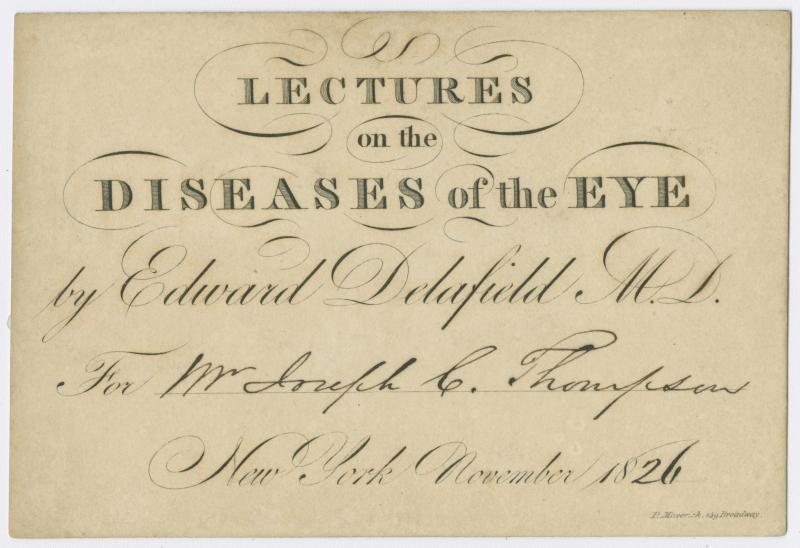 A small donation we received this summer documents what may be the earliest known ophthalmological instruction in New York, and perhaps the nation.  The gift was of seven admission tickets for classes at the College of Physicians and Surgeons (P&S) belonging to Joseph C. Thompson of Monmouth County, New Jersey.  Thompson attended P&S during the 1826/27-1827/28 academic years, though he never received a degree from the school.

As at most ante-bellum US medical schools, P&S students took courses in any order they cared to, and in any topic.  Thompson’s admission tickets were “proof of purchase” showing that he’d paid the professor whose class he was attending.  Not particularly rare on the market, admission tickets remain generally affordable medical collectibles.  Archives & Special Collections, as with most medical history collections, has a good number of them, but our holdings for the 1820s were thin so we were happy to receive these.

To our surprise, most of them were for professors and courses we hadn’t seen before. Two in particular caught our attention: one for admission to “lectures of the diseases of the eye” taught by Edward Delafield and another admitting Thompson as a “pupil” at the New York Eye Infirmary.  Delafield, an 1816 P&S graduate, along with his medical school classmate, John Kearny Rodgers, had founded the New York Eye Infirmary in 1820, making it not only the oldest eye hospital in the US but the oldest specialty hospital of any kind in this country.  It still exists as the New York Eye and Ear Infirmary of Mount Sinai Medical Center.

That Delafield was giving ophthalmological lectures in 1826 isn’t a complete surprise: John Dalton in his 1887 history of the College asserts that “a special course of lectures on the diseases of the eye was given by Dr. Delafield” at about this time (p. 59). However, there is nothing else in the P&S archives that verifies this – the College’s annual catalogs for this era include lists of students, professors, and trustees and very little else. While Delafield is listed among the professors, his title is professor of obstetrics and gynecology, not ophthalmology.  It’s not until 1837 that the catalog mentions the New York Eye Infirmary as being open to P&S students and it isn’t until the 1849/50 catalog that the implication is made that instruction is offered there.  The College’s first professor of ophthalmology, Cornelius R. Agnew, wasn’t appointed until 1867.

So clearly Dalton was correct; and we now have additional, unassailable evidence that Delafield was giving ophthalmology lectures to P&S students as early as 1826, even if these were, as Dalton notes, considered “special” and not a regular part of the College curriculum.  Since the New York Eye Infirmary was the city’s only eye hospital in the 1820s, we can probably safely say that these were the earliest lectures on the diseases of eye given in New York.  But can they also be the earliest given in the United States?  More research will have to be done before that claim can be made, but our small, elegantly engraved tickets certainly give P&S a lead in this contest.